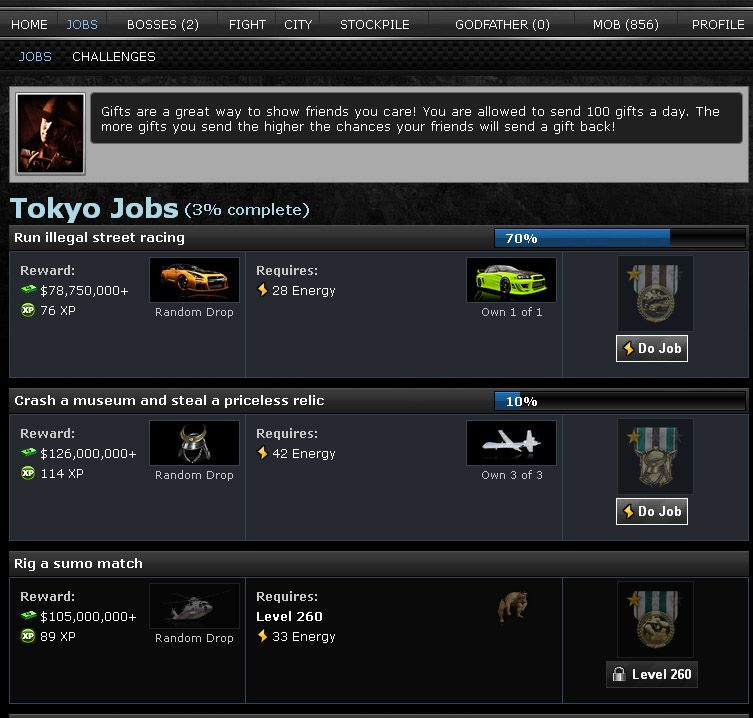 An Introduction to Mob Wars

Start your career as a petty thief, taking on dirty jobs and pulling off thrilling heists. Work your way into the ranks of a cutthroat but close-knit crime family 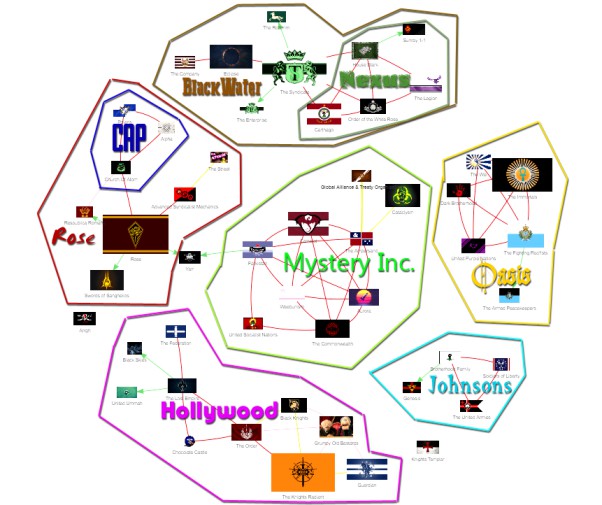 The so called ‘Guns N Roses’ war in the online game Politics and War destroyed the equivalent of over $300,000 USD in in-game materials.

On the internet, there are many browser games dedicated to managing and running a nation. It’s one of the more popular forms of browser games, even; they lend themselves well to text-only games, making them relatively easy and inexpensive to maintain and update. However, these games aren’t generally played on the timescale of days; even the ones where direct competition between multiple players is possible tend to be played over the course of weeks, months, and years, until you get sick of it and drop it. There is no real win condition, and you can’t exactly lose; the game goes on as long as you have the patience for it. BLOC, a game of geopolitics, was just a little bit different.

So, what was BLOC, exactly?

It was a nation simulation game that took place during the height of the Cold War, with nations taking the side of either the United States or the USSR while forming their own smaller alliances in turn. It was never truly popular, at its peak having only 500 or so active players.

At first glance, BLOC appeared to be a relatively simple game by the standards of others in its genre. The main resources in BLOC were Cash, Raw Materials, Oil, Manufactured Goods, Weapons, and Food. Every resource aside from food had a corresponding production building, with mines for raw materials, oil wells for oil and industrial buildings for more advanced resources like manufactured goods, research, and weapons. Each of these took up a specific amount of land. All unused land was used to grow food, and running out of food conferred a staggering penalty to most of your nation’s stats. This is important to remember because you cannot buy land in BLOC; everyone starts with 20,000 square kilometers, and you can only get more land by winning wars against other nations.

Wars also appeared simple at first; each nation had a certain number of troops, a technology level, aircraft, and ships. If one side attacked a nation when the defender has less than 5k troops, the attacker won and stole a portion of the enemy’s resources, land, and cash. However, there were a few non-obvious things worth remembering. First, while there were limits on who you could declare war on, possible war targets were restricted solely by GDP; an easily manipulated statistic that grew or shrank considering how many material-producing buildings they had. In addition, the size of a nation’s army was solely determined by how large an army they could support; there was no firm limit besides money and time.

The game’s most distinctive feature was that every six months, generally after the second nuke was dropped, the game reset, and every player was set back to square one. All alliances were deleted, and the scramble began once again.

The regular resets, combined with the land system, meant that BLOC tended to be played far more aggressively than just about any other game of its type. Peaceful trading nations and alliances, for the most part, simply did not exist. After all, the only way to grow your economy quickly was to have more land, and the only way to get more land was war.

To explain just how important this was, and how much it changes the dynamic that these games usually have, compare it to Politics and War – a game with a somewhat similar pace, and comparable mechanics. Politics and War lacks the regular resets and the land system of BLOC. The result? In Politics and War, the game is more relaxed. Raids happen, wars happen, but the effects are never permanent; you lose a bit of money, maybe your nation gets a little wrecked, it’s no big deal. Alliances rise and fall generally as the result of major incidents, and wars, and such; wars and alliance disbandments still happen, but there has to be a reason for them to happen.

In BLOC, if you lost two wars when you just started the game (likely; if you are not in an alliance when you join, you would have been viewed as an easy target and immediately been dogpiled by raiders), you might as well have just deleted your account and started all over again. Your nation would not have been viable because you would have lost too much land. If you lost badly enough late into the iteration, you would have been basically out of the game until the next reset because you could not have possibly become powerful enough to be relevant fast enough before the iteration ended. Grow, or die. Win, or immediately lose and be forced to wait for months to try again.

In this environment, where slowing down means getting left behind and the land economy is a zero-sum game, one doesn’t need a good reason to start a major war; rather, one needs a lot of reasons not to. At the same time, major alliance disbandments happened far more often compared to Politics and War; after all, every six months, you have the perfect excuse to try something new, encouraging new ideas about alliance management to flourish.

What can we take away from BLOC and apply to other games?

Due to the faster pace and heightened aggression that was necessary to succeed in BLOC, its players tended to both adapt to new situations faster, and experiment with new tactics and ideas more often.

One of the more recent iterations featured an alliance known as the “Ancient Evil”. At the time, they were generally considered to be an unusually aggressive pirate alliance, meaning they were constantly attacking and stealing resources from other nations, and were extremely well-coordinated, 26 members strong. Their alliance always had a tax rate of 100 percent, and featured a bank management bot on their discord that every single member could withdraw from without limit. While there are obvious reasons why this couldn’t work for most alliances in most games, it was effective enough for their economic development that they were able to be a major player in wars with alliances that had 5 times their membership.

Another alliance whose name was lost to time opened a casino and lottery, utilizing one of the many discord gambling bots, and ran it entirely legitimately. Their alliance eventually fell when it stopped running the casino fairly and gave too many people an excuse to go to war with them, but until it fell, it was an economic superpower that took the profits and used them to bolster their own members.

Many of the top alliances even had webpage scrapers and powerful Excel sheets that could show every member in an alliance, their relative economic and military power, the exact odds of winning or losing ground battles against each member, and more.

Nowadays, the game is in ruins; the creator has abandoned it, the economy has gone into a meltdown, and armies of sockpuppet accounts are running around. However, in these examples, there is a lesson to be gleaned that can be easily applied in other games – while there is safety in following the example of others, and doing things as they are currently done, in a conventional way, there is also great potential in adopting radically different ways of playing the game.